a multi-talented and easy-going genius

who made the most of a bum deal.

You're listening to one of a series of Commentaries that my late great friend Ned Paynter recorded for KPBS San Diego back in 1986. You can put it in the pause mode while you read, but do come back to it—you'll find it perennially timeless.

When Ned reached the half-century mark in 1986, he tossed off one of his cartoons in light-hearted anticipation of what might be coming next. 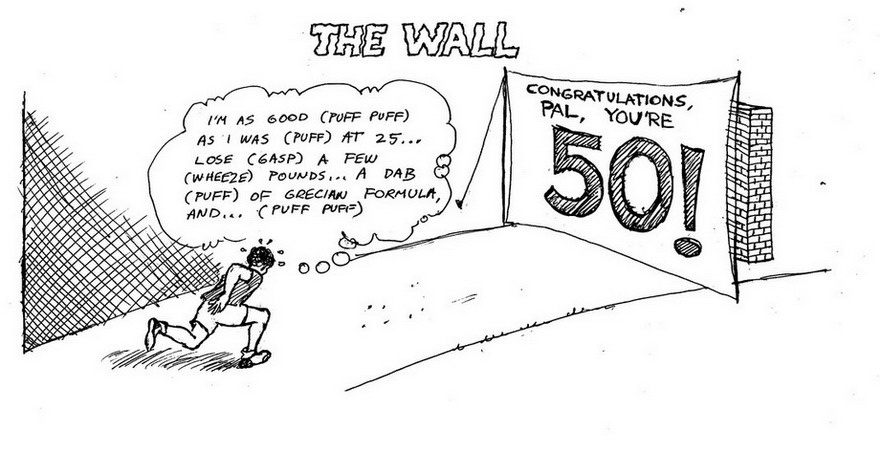 Little did he know. Soon he would be invaded by the spinal cancer that would make the rest of his life a waking nightmare. With the collapse of American Studies as Academic Flavour of the Month, he had already lost his career.  That was in the early 70s—from then on he occupied a series of temporary teaching posts in Germany, England and America. At the end of each he would be told, regretfully, that although he was both highly competent and popular, the funds just weren’t available to keep him on.

I first met Ned in the early 60s when we were both working at KPFA. Ned was the News Director and he gave the job the total dedication that he gave to everything and to everybody, including friends, wives (just a couple) and lovers. (His attention was sometimes so total as to become exhausting—you had to be prepared to give in return.)

Ned wrote a brilliant dissertation on American Writers in the Machine Age (from Walt Whitman to Louis Mumford), which I sat up reading until 3 a.m., unable to put it down. It was ultimately rejected for publication by Viking, OUP and Greenwood. As the great Malcolm Cowley put it to him in the course of their correspondence,

With changing styles in graduate and undergraduate studies, there seems to be a smaller market for studies in American literature than there was a few years ago.

I’m lucky to have a copy of this brilliant, absorbing book. In 2005, a couple of years before he died, Ned went to the trouble and expense of having the manuscript photocopied, put in a binder and mailed to me. If only he had lived into this increasingly digital age!—it could be online, instantly available for the foreseeable future (if any). As I write I become increasingly convinced that that’s what I must do.

I've now finished it, including the notes, attached to each chapter as photocopies—it's HERE.

But it’s not as if I’d been neglecting him. Back when we were regular e-mail correspondents Ned sent out regular political diatribes to a few friends under the persona of The Irate Codger. They were so brilliant that I eventually opened a blog on his behalf and put them up as they came in. They’re still there and they still get an occasional grateful reader – you’ll find them HERE. 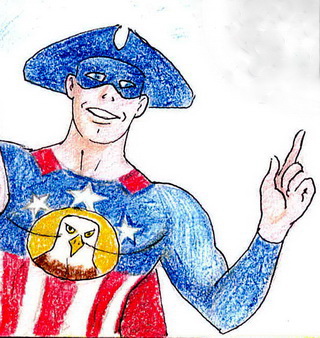 Ned first trained as an artist. When he got out of the army he used his GI Bill to spend a year at the Ruskin School of Fine Art at Oxford. He never made a career of it, but throughout his life he tossed off cartoons whose concepts, captions and artwork were as brilliant as his prose. During the Bush Era he became so angrily inspired that he set forth the continuing adventures of Captain Freedom, which I subsequently put together into another blog [click HERE]. (Warning: some of the drawings are obscene—how could they not be?!)

After his death, still more cartoons showed up that I hadn’t even heard of. Ned was an inveterate baseball fan. His nephew Bruce Jaynes wrote to the website Uni-Watch: 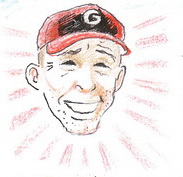 Like most longtime baseball fans, he despised most of the modern changes and longed for the game of his youth. As a way of venting his disgust, he created an alter ego called The Grizzled Veteran — a crusty, Ty Cobb-like columnist who had a chip on his shoulder and an ever-present frown. [though not on this particular picture].

The cartoons were posted on the site, and so Ned has yet another online memorial.

What else did Ned do in his

spare time? He was an enthusiastic student of architecture and an inveterate photographer, which led him to accumulate a phenomenal library of almost ten thousand slides which he had taken all over the world. His most lasting memorial is a dedicated website put up by the San Diego Friends of Architecture, The Ned Paynter Collection [click on logo], in which they are all available for viewing and for purchase.

Near the end of his life back home in San Diego Ned contributed a series of Commentaries to KPBS, the local non-commercial FM station. Some years ago he sent me a few of them. Even after a quarter of a century most of them still have a timeless relevance, and so I’ve put them up on this ever-expanding website. Here they are:

1. Photographers of the Weimar Republic

3. Publisher Walter Annenberg, Nixon’s friend, gets the President’s Medal (29 May 1986)

7. Rainier Ale against the wine coolers

8. Top Gun “Training must go on endlessly for the crisis that never occurs.” (Veteran’s Day, 1986)

9. State senator fights to expand the definition of pornography

11. Plea for the return of jazz to KPBS

12. Martin Luther King, Junior – the Man and the Street

Ned died on Sunday morning in hospital. He was taken by ambulance on Friday evening as he was having difficulty breathing and was put on life support. By Sunday he told me to take him off everything—he wanted to go. The doctor explained to him the process and it went very fast. He was given morphine in a drip and when he felt very comfortable the meds keeping his blood pressure up were removed and he just slipped away.

Last fall I heard an interview with the writer Reynolds Price on PBS concerning his book about his own spinal cancer, paralysis, and ten years of pain. He was asked, ‘Do you ever ask, “Why me?”’ He said, ‘That’s one thing in all this about which I feel some pride. I never waste my time asking that question. Why not me?’ Well, I’ve never wasted time on it either. It’s rotten luck, but some people have rotten luck, that’s all. It’s made me despair often, but I don’t feel any grievance. It was nothing personal.