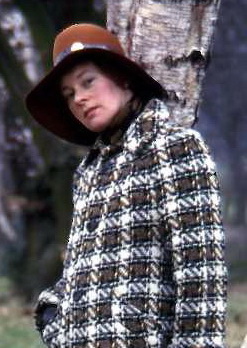 for the second half of my life.

Sometimes a fool for a pretty face hits it lucky and falls for one with a beautiful mind and soul behind it. Our first conversation began in front of the Battersea Shield at the British Museum and continued on for the rest of the day and into the evening, drifting from pub to cafe and on to another pub. Contrary to the evidence, you kept insisting that you weren’t an intellectual and that you could never have gone to university. Close to half a century and half-a-dozen published books later, such self-denigration is even less convincing. Add in the dozens of articles and hundreds of classes and lectures, plus the odd couple of Oxford Symposium papers, and it becomes a fit subject for uproarious laughter!

Meanwhile, my pursuit of Art for Art’s Sake was bringing in the sort of irregular income that you’d expect of such introspective self-indulgence. While my concert tours were taking me all over the Northwestern Quadrasphere, you were keeping the home fires burning with a ferocity that lit the horizon – no trouble in finding my way back! Once home, the food you put before me was just as tasty and much more healthy than what I’d been shovelling in at groaning tables all over Europe and America.

You’d think that such a hard-working wife would welcome a bit of leisure, but twice you solidly backed my refusal of a job-for-life at a prestigious foreign institution, with an appropriate salary and pension. Meanwhile, you managed the family finances so astutely that we needn’t worry about our economic status until the government itself collapses (which of course is not out of the question).

But most important of all, after half a century the love that we've shared for so many years still lights up my life. Now that I'm no longer working and travelling, it now centers entirely around you and the happy days that we have spent together. Knowing your love of gardens, one of my greatest recent joys was planning in detail a two-week tour of over a dozen of the finest gardens of southern Normandy, concluding each day at a near-by Michelin-recommended restaurant.

Meanwhile, the walls ring with our laughter, your well-tended garden would be showable, and delicious new recipes keep appearing on the table, their caloric content sufficiently low to have assisted my last-chance weight reduction to a shadow of my former self. As for the pretty face, it’s still there and it’s still firmly attached to a body that . . . [rest of passage blocked by Firewall]