for an open-ended life-long collaboration.

As the quasi-official photographer at a friend's farewell party in 1978, I went about snapping everybody in sight. There was a lot of music going on, including a small jazz combo that included a trombonist, a wild-haired kid who blew a mean horn. I duly snapped him. Within a few short years he was one of my closest musical collaborators and is now Mary’s and my most intimate friend and a regular guest whenever he comes to London. Reader, have you ever given any though to foretelling your future? Don’t even try! 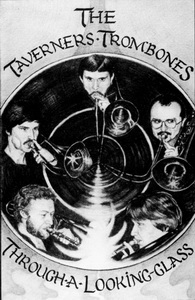 David Robertson, now a world-renowned conductor, brought us back together four years later. His quartet for four trombones was to be included in a cassette release by John’s ensemble, the Taverners Trombones, and David knew enough about my work to recommend me. The three of us immediately hit it off like a trio of musketeers and the project was a joy from start to finish. [You're listening to a glorious arrangement of Fly Me to the Moon!] 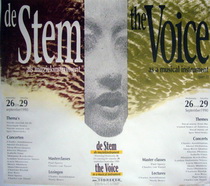 KER in Amsterdam in 1990 where I was performing with Electric Phoenix. A year later we were brought collaboratively together by the German madman Hans Joaquim Hespos. He and I had met and worked together at the Darmstadt Verienkurse for modern music and he subsequently engaged me to write the libretto for a short opera to be produced at Frankfurt. In the event, the Frankfurt mafia insisted that he use a librettist of their choosing, who turned out to be terrible. He took his revenge by making the libretto virtually inaudible and totally incomprehensible.

He did however succeed in getting me on the payroll as sound designer. The music was provided by two percussionists wielding chrome steel hammers against an array of enormous steel sheets and rods. Hespos instructed me that during the last twenty minutes I should take the sounds they produced and amplify, distort and multiply them, raising their volume and density to the point where the audience would be driven out. The work would thus reach its apotheosis in an empty hall.

I followed his instructions with enthusiasm. The audience remained riveted to their seats. At the end they applauded politely, as though they had just been treated to a Mozart string quartet, and quietly filed out. One or two stopped at my mixing desk at the rear of the auditorium and asked questions about my treatment techniques. I’m sure their response would have been no different if I had brought blood gushing from their ears. (If you’re a dedicated glutton for punishment, you can take twenty minutes and listen to my unsuccessful effort to cleanse the temple. You should barely be able to hear the opening; otherwise your speaker cones will end up somewhere across the room.)

HESPOS BROUGHT JOHN AND ME together for a week’s residence at the Akademie Schloss Solitude, an exhibition, performance and residential center where young artists of all sorts could live for several months at a time, working on projects of their choice and interacting with each other and with visiting instructors. We were given carte blanche to work together for a week preparing a joint electro-acoustic concert. I had brought a van load of amplification and digital treatment devices and we were given a large basement hall to set it up, experiment and give a couple of student workshops.

That glorious week became money in the bank! We were able to adjust to each other’s musical instincts and learned to read each other’s signals at a subliminal level like any well-blended musical duo. One composition in our final recital was Aller Simple, a piece calling for improvisation against a pre-recorded tape. For me, it was a close companionship that would see us through countless joint recitals in which we often thought that the best music on the program had been our improvisations.

er major stage in our collaboration centered around the carnyx, an ancient celtic instrument of war that summoned up memories of The Mukkinese Battle Horn [right]. [Those who want to know more about the carnyx should go to John’s website, Carnyx and Co, where it can be seen and heard. For an audio-visual treat, click on Videos, then Secret House.] This remarkable instrument would become the basis for endless new commissions, improvisations and tours, including all the way above the Arctic Circle to Harstad [left], which I've already documented in a previous journal.

A sad, glad and utterly memorable occasion brought John together with professor/poet Eric Mottram (who has his own page HERE), and just in time. It was over dinner a few days before Eric died, and the conversational marathon resulted in John's memorable setting of poems from Eric’s The Book of Herne. [Ed: A major, and a moving, work — you can listen to it HERE.] Eric said to Mary later that evening as she drove him to the tube station: “I’ve never met an intellectual trombonist before." Less than two months later those words would be repeated at the Celebration of the Life of Eric Mottram at King's College, where we performed an improvisation in his honor.