and the end of wisdom

Over half a century ago my real academic education began at Stockton College, California, with a remarkable man named Irving Goleman. Professor Goleman was a sad, hollow-eyed Jew who carried the world on his stooped shoulders. He had been to the edge of the abyss and stared down into it. What he saw was so horrifying, but at the same time so avoidable, that he was driven to impart his vision to his students—even from the occasional depths of depression, in which he had been known to lie on his back atop his desk, delivering his lecture from this funereal position.

He seemed to care for nothing except knowledge and the sharing of it—there was never time enough to impart it all. He organized all of human creativity along great temporal arcs on the blackboard, in which civilizations began in primitive simplicity, ascended towards classical rationality, and then declined into romantic decadence. Everything seemed to fit into these schemes, whether they were applied to ancient Greece, western Europe, or the cultural history of China or India. Like the massive cyclical structures of Spengler and Toynbee, they provided an assurance of order, a guarantee that we were living in a rational if indifferent universe. And the greatest lesson of all was from Terence: "Homo sum, humani nihil a me alienum puto", or "I am a human being, I consider nothing that is human alien to me."

But it was always evident that Professor Goleman's enlightenment had come at a price; it shone forth in the heartfelt intensity with which he presented the Aristotelian theory of tragedy. A student recalls an episode in which he disappeared for about a week and was found in San Francisco with amnesia.  Fortunately, he was recognized by a woman living in the city who was a former student and sister of a resident of Stockton.

Another former student wrote a generous appreciation which makes no effort to hide the intense psychological pressure under which Professor Goleman labored: 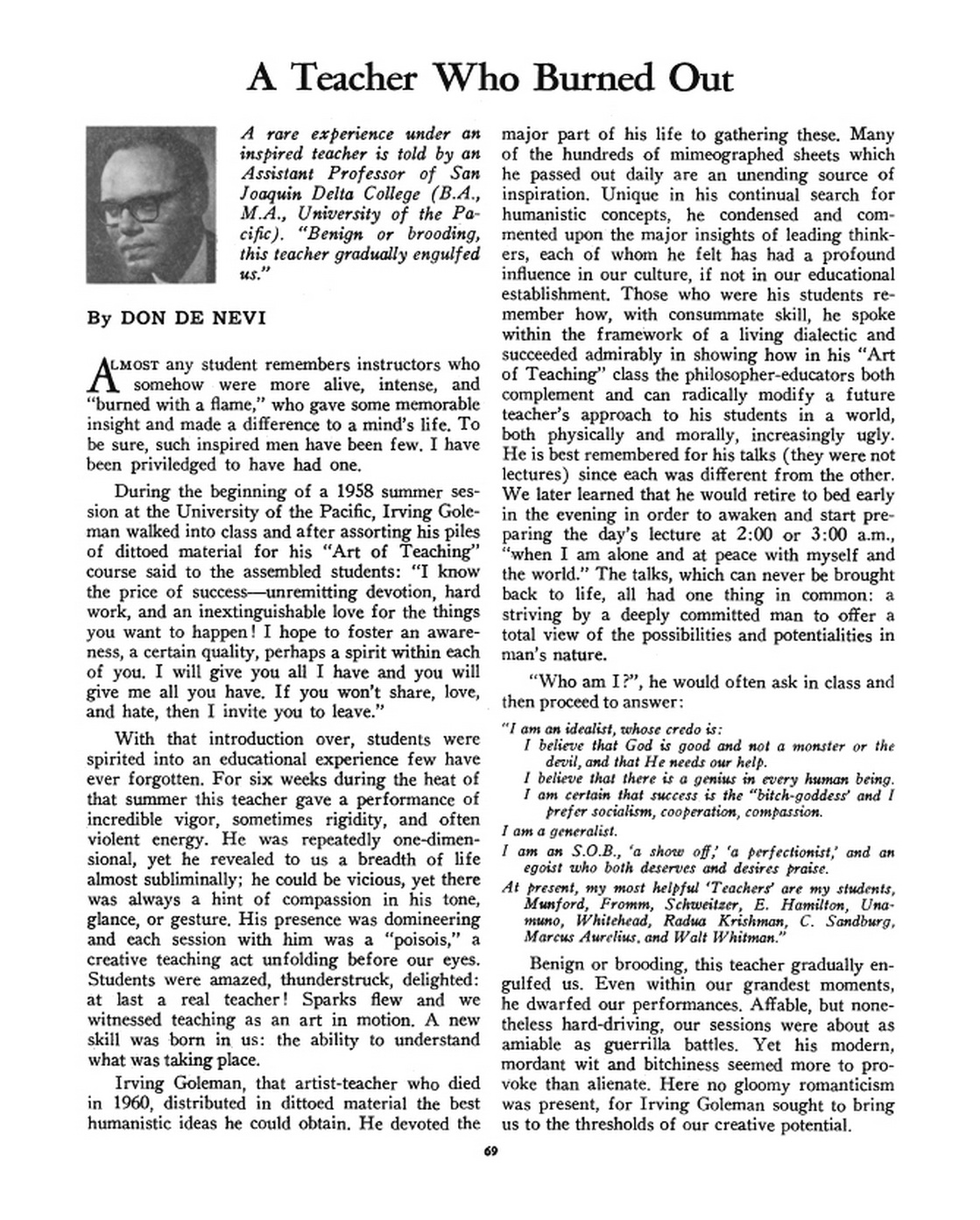 I was only one of the many students to value him so highly. Dave Brubeck, in his notes to his composition, Wilderness, wrote:

I am not affiliated with any church. Three Jewish teachers have been a great influence on my life—Irving Goleman, Darius Milhaud, and Jesus. I am a product of Judaic-Christian thinking. Without the complications of theological doctrine I wanted to understand what I had inherited in this world—both problems and answers—from that cultural heritage.

Professor Goleman had an acquaintance whom he declared to be even more brilliant than he was. After effortlessly taking a PhD in philosophy, this intellectual paragon set about writing down everything he had learned. Known languages — of which he had mastered several, both ancient and modern — proved insufficient for the task, and so he invented his own, encoded in a three-line notation consisting of a tripartite staff of cursive oriental-looking scripts. I used to have a tiny scrap of it, in which a thick line, as of upper-case letters, was paralleled above and below with narrower, more dense lines, resulting in a complex multi-layered calligraphy.

The learned scholar turned out reams of this tantalizing script. All day and all night he did nothing except eat, sleep, write and relieve himself in a corner of his padded cell. Solitary confinement had become necessary after he realized that he was God; thenceforth anyone who disagreed with him over the slightest thing was declared anathema and sentenced to summary execution. His few visitors communicated with him from a respectful distance.

Both these formidable intellects had dedicated themselves to the revelation, preservation and propagation of truth. They seemed to have no ulterior motive, other than a certain power-pleasure which comes in a more widely destructive form to those who seize control over others through politics, finance or warfare. For these two noble minds, fulfillment lay in the hope that their insights would be conveyed to posterity.

And so, as I pass my eightieth birthday, I ask myself, what is the ultimate price of enlightenment? Perhaps Max Beerbohm was the wisest of us all:

I am inclined to think, indeed I have always thought, that a young man who desires to know all that in all ages in all lands has been thought by the best minds, and wishes to make a synthesis of all those thoughts for the future benefit of mankind, is laying up for himself a very miserable old age.

Irving's son Daniel has written a short biography. He has followed in his father's footsteps but redirected them into the profitable self-promoted field of Emotional Intelligence (as opposed to Emotional Integrity).