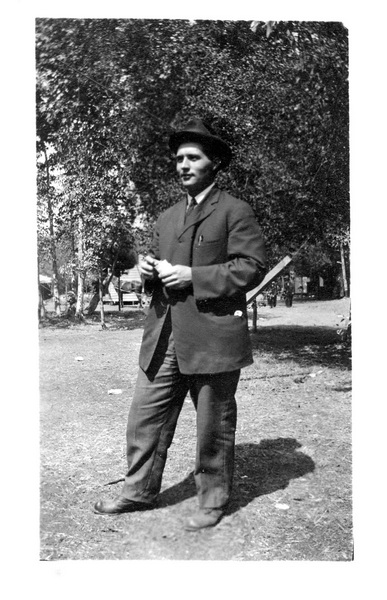 Take up thy bed and walk

How my father qualified for sainthood

In addition to providing the usual indispensables such as the prerequisite sperm, shelter and sustenance, there are lots of things I should thank my Dad for, but one in particular stands out as virtually unique. I’ll save it for last.

I was born a Cape Codder entirely by accident – two in fact, one of geography, the other of biology. After getting his divinity degree from Boston University School of Theology, Dad stayed on in the area, serving several churches in southern New England. Chatham didn’t offer much evening entertainment and there was no television in those days, and so my parents-to-be, at the ages of forty-two and thirty-seven, discovered to their surprise that, even though this was Cape Cod, there was nevertheless a little Whiting on the way.

As a preacher, Dad lived with the free schedule of the self-employed, and so as I was growing up I kept him regular company. He was a born teacher and explained the skill of every physical task he carried out, particularly in the area of carpentry. (But he never gave me moral lectures, thank God!) In the course of his ministry he had built three basic churches and two parsonages, and years later when he built a third parsonage to a much higher standard, I would spend a summer between college terms as his assistant. Working with him then would be one of our closest times together.

Dad stuck it out in the East for another sixteen years, but he had always been a Westerner by inclination and disposition and he finally decided that he had had enough. Much against the will of my mother and me, he requested a transfer to California just as I was about to enter my last year of high school. I had lined up everything I wanted, including election as head of several clubs and committees, a virtually guaranteed scholarship to Brown University, and probable selection for the D.A.R citizenship award, which usually went to the most sanctimonious, self-regarding member of the graduating class. Suddenly I was to be dumped in my senior year into a totally strange environment where I would be not just a nobody, but a conspicuous alien. It would be years before I forgave him.

If only I had known how much I owed him! I had had polio when I was three and made a seemingly miraculous recovery. It was not until after my father died that I learned that the miracle had come, not from God, but from rather closer to home.

Dad had wanted to be a doctor, but his poor southern California family, consisting mostly of Pilgrim Holiness preachers of both sexes, couldn't possibly afford it. The instinct, however, was there. When I got over polio, Dad was told that I'd be paralyzed forever from the waist down. The treatment in those days was total immobilization, strapped to a board, which was a good way of guaranteeing that this dire prognosis would indeed be inevitable.

Staring at my miserable captivity, Dad felt that it must be totally wrong. Against doctor's orders, he released me from bondage and certain paralysis and started to experiment with an eccentric treatment. Every day he would float me in a full bathtub and slowly exercise my legs with his hands. He made a game of it so that, as far as I was concerned, it wasn't "treatment", it was just playing in the bath. Gradually over a six-month period I regained the use of my legs and was finally up and walking again. There was no residual paralysis whatsoever. The doctors wrote it off as "sponaneous remission".

There are two remarkable footnotes to this story: First, this was in 1934, when Sister Kenney was still a totally unknown Australian, so Dad couldn't possibly have read about this treatment anywhere. Where did he get it?

Equally remarkably, he made my mother and sister swear that they would never tell me what he had done because he didn't want me to grow up feeling indebted to him. He bit his tongue even when I was telling him off for ruining all my plans by moving back to California. If there is such a thing as sainthood, he must be leading a pretty comfortable existence up there—what a shame that I’ll probably be going in the other direction and will never get a chance to thank him.

A couple of years after Dad retired, he and Mom moved to El Cerrito, a small city next to Berkeley and a short drive from where I lived. Of course he became active in the El Cerrito Methodist Church, preaching an occasional sermon. On one of these Sundays, suspecting it might be his last in the pulpit, I set up my classic Electrovoice 635A microphone, attached it to my equally classic Ampex 600 and recorded him. That was on 9 April 1961.

Fifty-five years later I’ve put the tape on my ancient Tandberg Series 15, which still looks and plays like new, and digitized it. As always, though he hadn’t preached for a year, Dad spoke without notes, following his train of associated thoughts as easily as – well, as easily as the other carpenter they had all been celebrating on the previous Easter Sunday.

So HERE IT IS! Thanks to the miracle of the internet, I’ve provided Dad with his own resurrection!