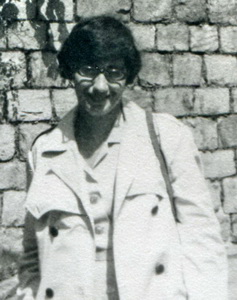 and I was well into my thirties.

In the summer of 1966 I was working at the American Embassy in London, putting together a radio program which would accompany the report to Congress on their just-completed Festival of American Arts and Humanities. Entrance to the Embassy premises was pretty relaxed in those days. I could come and go at any hour of the day or night with just a nod to the Marine guard on duty at the door, all of whom knew me by first name. I was even able to carry tape recorders in and out in order to work at home, and with no papers to sign – I could easily have emptied the sound studio!

One morning a visitor came around. She was the photographer at the Cairo Embassy. We got into a conversation that became more and more interesting, in the course of which I learned that she was a Greek resident in Egypt, so multi-talented and athletic that at just over thirty, in addition to her photographic work, she had also had at least three separate careers as a ballerina, an opera singer, and a member of Egypt’s Olympic swimming team.

We rather hit it off and so I suggested that we go someplace for a beer. There was a quiet pub near my flat that was a good place to talk. A couple of hours and a couple of pints later I heard myself asking in a matter-of-fact way if she’d like to make love. “Yes,” was her immediate, no-words-wasted reply. My flat was a short walk away, during which our conversation continued unabated.

As soon as we were in my bedroom, Helle took charge. “I’m going to go wash,” she said, “and then you must do the same.” She returned naked, glowing and smelling deliciously of soap. “Your turn,” she said. I needed no urging.

I’ll spare you the details of foreplay — this is autobiography, not pornography. The narrative resumes at the point where we had both reached a satisfyingly simultaneous climax. I was quite enjoying myself and saw no reason to stop. Rather to my surprise, she came again . . . and again . . . and again . . . At some point after I had lost count, she said, “You must be tired – you don’t have to go on.”

“Not at all,” I replied, “I’m having fun!.” Some time later I reached a second climax and we deliciously relaxed, all passion spent.

Helle was most appreciative. “You English aren’t supposed to be very good at this,” she said, “I almost refused your offer.”

“I’m glad you didn’t,” I replied with the utmost sincerity. “Are you sure it was swimming that was your Olympic specialty?”

Helle was in town for another few days and so I showed her around – Westminster, the Tower of London, the usual places. One of the things that has made my life particularly pleasurable is that I’ve never made love with a woman with whom I hadn’t first established at least the beginnings of a friendship.* Helle's Greek ancestors were absolutely right – communication, including instruction, is often easiest and most natural when social and sexual intercourse occur together. (see Call Him Jack. . .)

A few days after Helle had returned home I received a cordial thank-you note in which she invited me to come to Cairo, offering me a one-way ticket and open-ended hospitality. I thanked her profusely for her generous offer, but suggested apologetically that what I had rarely accomplished before I might never achieve again. We exchanged a couple of further friendly letters and parted with happy memories.

* I’ve never been able to go to bed with a woman just for sex. I’ve no interest in that. I want to hug you and kiss you and make you feel good and protect you. And get a nice note the next day, stay in touch. That’s Keith Richard, aged 67. If you’re big time in the pop world, you’ve got to be old before you can admit that you’re a softie.